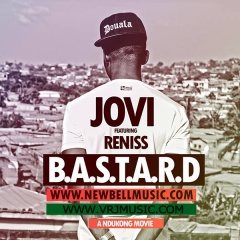 JOVI one of the Cameroonian Urban Stage Artist the more in view these last Years. J.O.V.I is the Cameroonian Urban Artist who proposes more of Singles For Free Downloading on Cammeroonian Websites and also more of Clip Videos for the great Pleasure of his Fans and Lovers of the Urban Stage.
PRODUCER & ENGINEER of sound at a time, one recovers it on several collaboration under the code of the MONSTER when J.O.V.I is not an artist on a Project he is call THE MONSTER as to say PRODUCER his latest collaboration as PRODUCER was seen on the latest Album of Lady B “Au Pays des Femmes Sage”.
Mr. of the égotrip, After FAMILY exit in last December, J.O.V.I marks his entring in 2014 via the Video of B.A.S.T.A.R.D, single officially exit the 24/09/2013 at 4pm. In this Video He chooses to denounce pains of the society (poverty, lack of use corruption…) and benefits some to make a foot of nose to the Haters.
A Video achieved under the control of Ndukong Bertrand. The Official Exit of this Video also mark the end of a Long Break of the Cameroon Urban Stage because if 2013 was a Fruitful year for the Cameroon Urban Stage, then 2014 must be more Better inorder to prove to the whole World what we are Capable of and the only way to show is by Hard Working.
To View the Video Click Here.!
Tweet